Orpheus and the Medici: or “Look who’s back, bitches!” 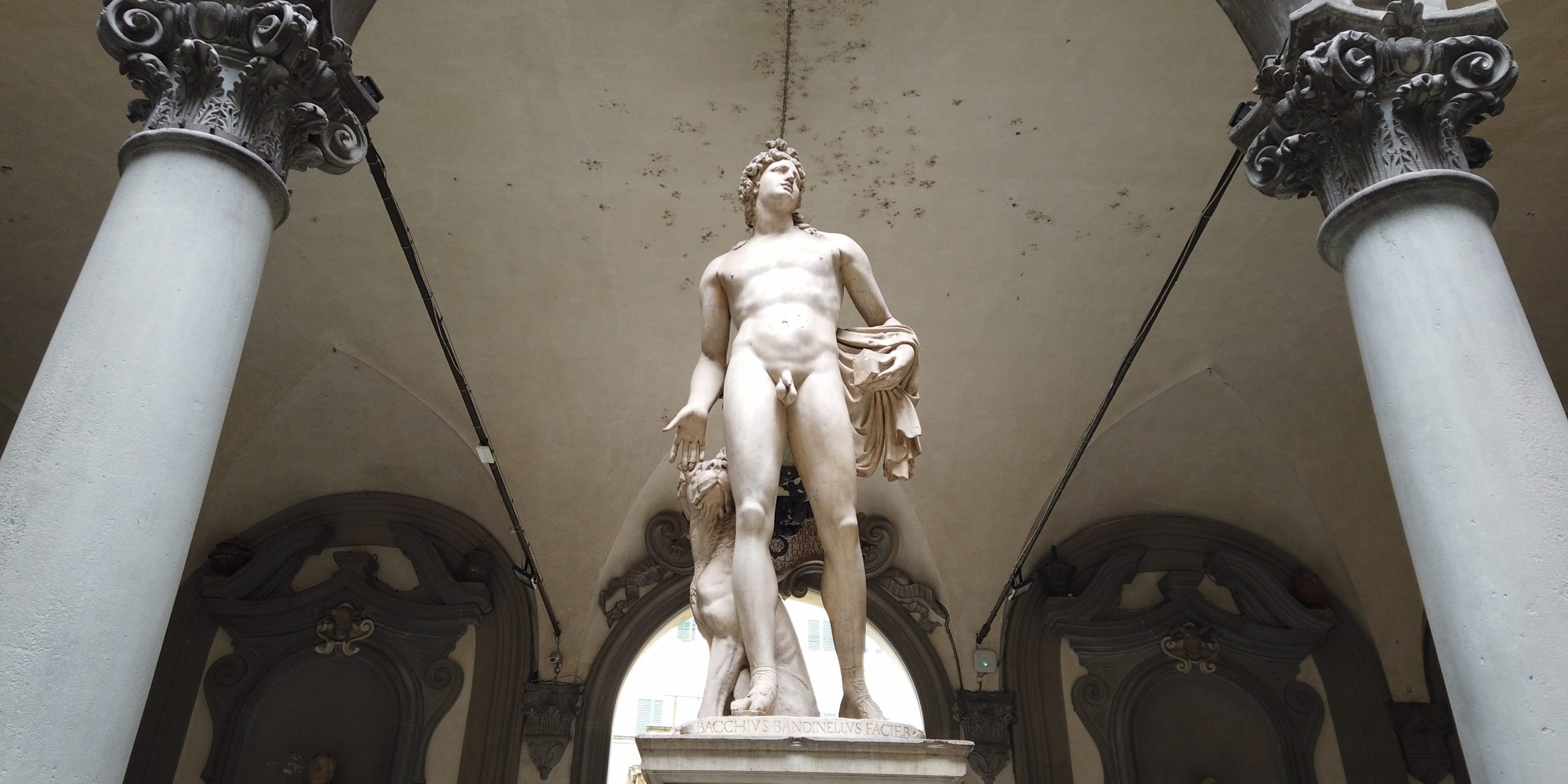 The Medici Palace was built by Cosimo di Giovanni de’ Medici in 1444 and, in 1657, sold to the Riccardi family who increased its size and changed some of the rooms inside following the latest Baroque trends. However, the main courtyard still sho

ws the same beautiful Renaissance features chosen by architect Michelozzo in the 15th century. The Medici family, who ruled Florence for over three hundred years, faced some ups and downs and after Cosimo and his grandson, Lorenzo the Magnificent, ruled the city, the Signoria (Florence government) forced them into exile. The banishment lasted until Giovanni, Lorenzo’s fourth son, brought back the Medici by becoming pope Leo X in 1513. One of the works of art celebrating his return was Baccio Bandinelli’s statue of Orpheus (1517) which he placed right in the middle of his front courtyard, where it’s still standing.

The Myth of Orpheus Why Orpheus? Well, legend has it that young, handsome Orpheus had lost his love Eurydice to Hades (she was bitten by a snake while picking flowers) but after making a deal with the god of the underworld, he got the chance to go down the nether realms and take Eurydice back. However, he failed to obey Hades’ only rule (don’t look back), so his love was lost forever. Bandinelli’s work depicts the young boy stepping out of the underworld, while three-headed hound Cerberus is looking at him (Cerberus looks a little puzzled, a little like, “Dude, really? Which part of ’don’t look back’ didn’t you get?”). Anyway, the political meaning is quite easy: Orpheus comes back from the underworld unscathed and is, in a way, reborn just like the Medici family after their exile. But there could be another reading beyond this one. An interpretation that involves a different kind of rebirth.

In his Metamorphoses, Greek writer Ovid tells us that as soon as Orpheus he got out of the mouth of Hell we promised he’d never look for the love of women again and took on teaching homosexual love to young Grecian men. The Maenads, wild monstrous female creatures, couldn’t accept Orpheus’ dramatic turn and tore his body from limb to limb, scattering the severed parts all over Greece. So was Orpheus gay? I’d say at least bisexual. Was Leo X gay? Probably. But he might not just be talking about himself here. He’s looking back at the time when his father and grandfather were in charge of social politics in the city.

What was so special about those times that needed celebrating? First of all, the Medici ruled and that was special enough. Second of all, in those times sodomy (which, back then, meant basically same-sex intercourse of any kind) was so popular that a special court of law called the Office of the Night was set up to deal exclusively with same-sex matters. In 70 years they prosecuted over 30.000 men. Renaissance Florence was indeed famous for its citizens’ proclivity for sodomy and the Medici, who were in charge, must have been more than open-minded to accept that. It has been suggested that they might have exploited the current situation to get some advantages but this wasn’t new in a town where politics was a matter of individual favors and private agreements. Not that sodomy was legal, of course. There were laws against it. But if sodomy was punishable by death in the 1300s, in the next century offenders could get away with just a fine. The Office of the Night was there for the purpose of policing rather than punishing this behavior and the Medici, who were always very careful to keep their position in the city stable, didn’t do much to upset the social life gay people enjoyed. For example, they didn’t shut down the notorious “buchi” (Italian for “holes”), bars where gay people could have a drink and some fun, although Franciscan preachers like Fra Bernardino da Siena claimed they were “the source of all vices and perversions”. Cosimo the Elder even protected famous somodites like Antonio Beccadelli, Il Panormita, a poet who had written a collection of erotic sonnets called Hermaphroditus, whose first book was entirely devoted to homosexual love. The book was burned at the stake all over the country along with portraits of his author but when Panormita came to Florence to seek protection, Cosimo de’ Medici was more than happy to welcome him in his house. The writer returned the favor by dedicating Hermaphorditus to him.

Poliziano’s The Fable of Orpheus the Renaissance, which, not surprisingly, was the time when his father ruled Florence? Perhaps, but there’s more. Leo’s mentor and teacher had been Agnolo Ambrogini, Il Poliziano, a well-known intellectual and scholar who strongly supported Lorenzo and his politics by celebrating him in any possible way. Recently, it has been suggested that il Poliziano might have had a love affair with Lorenzo the Magnificent himself. This shouldn’t surprise us because bisexuality was very common among young Florentines and, as Michael Rocke has brillantly argued, we might regard it as a kind of rite of passage almost every boy went through. Poliziano had written a theatrical drama called The Fable of Orpheus, where he tells Ovid’s story of the young hero but slightly alters the ending. Instead of having Orpheus reunited with his love Eurydice in Heaven, he has his hero die alone and suffering. We can’t know exactly when Poliziano wrote his play (the dates are uncertain) but we know that the author and his Lorenzo the Magnificent’s wife, Clarice Orsini, had fallen out on an unspecified matter. Clarice begged her husband to send the poet away from her house, and Lorenzo, perhaps unwillingly, obeyed and accomodated Poliziano in the Fiesole Medici villa, away from city life and himself. Poliziano will write many letters to Lorenzo, trying to get back his position as personal advisor and close friend, but all to no avail. No wonder Poliziano’s Orpheus is so sad: he will never be reunited with his true love… Lorenzo!

In conclusion, there are many possible ways of reading Bandinelli’s Orpheus if we put the sculpture back into its social context and think “outside the box” for a change. Visual imagery was important for the Medici – it was, indeed, political propaganda for them – so Orpheus might be more than just a symbol of the family who’s gotten back from the grave. It’s a way to celebrate the good old times when gays were just free to roam the streets and have some much deserved fun. It’s a little like pope Leo X himself, gown, tiara and all, was telling everybody in Florence, “Look who’s back, bitches!”.

For more information, come join us on our Gay Florence City Tour!

Categories: ART AND CULTURE, FLORENCE AND TUSCANY, LGBTQ+18 May 2021

The Florence Queer Community
18 May 2021