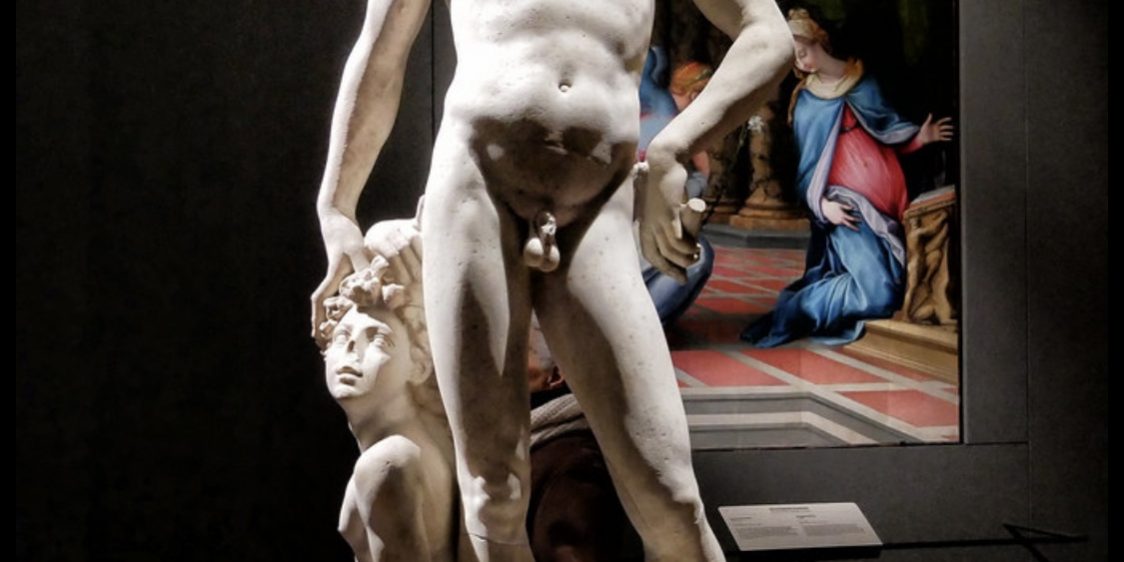 Benvenuto Cellini’s sculptural work “Apollo and Hyacinth” at Florence’s Bargello National Museum is one of the queerest in the whole Renaissance period. The group portrays Apollo, god of the arts and medicine, with his boy-lover Hyacinth in an episode drawn from Ovid’s Metamorphoses. The writers tells about a hunting trip when Apollo accidentally wounds his young partner. Unable to heal him, despite his miraculous powers, Apollo turns Hyacinth into a flower so that he will live forever in a different form. Benvenuto Cellini celebrates this touching moment with sophisticated elegance and skilled expertise. Apollo is depicted standing, proud and distant, while Hyacinth is kneeling at his feet as he is looking up at his god-lover adoringly and languidly for the last time.

The dominance/submission pattern Cellini deals with here is largely determined by the social and cultural context of Medicean Florence. The relationship between an older man and a younger one, close to what happened in ancient Greece between an “erastes” and a “eromenos”, was informally accepted in Renaissance Florence as it marked a significant moment in the growth of an adolescent boy and a fundamental rite of passage.

The Ancient Greeks prescribed a form of “love of youths”. Younger boys (eromenoi) submitted to intercourse with older men (erastai) as a rite of growth. Cellini turns this delicate moment into a meaningful artistic masterpiece which proves his extraordinary sense of invention. Just like Apollo transforms his protegé and lover Hyacinth, giving him all the knowledge he needs, Cellini, neo-erastes, moulds young apprentices into skilled artists who will be capable of celebrating the complicated allegories of Neoplatonic love. This outstanding work poses itself as a metaphor of artistic creativity which, like life itself, thrives on constant metamorphoses and love’s gender-free cross-fertilizations.

If you want to learn more about this work and many others, book our tour at Florence’s Bargello National Museum www.queertuscanytours.com/queer-art-at-the-bargello-museum

The Florence Queer Community
18 May 2021